Civic buildings have historically provided an architectural backbone to many regional communities, but over time this role has been diluted or lost, and many no longer retain their original purpose. Mark Fenwick takes a look at recent developments in Maitland and Lismore, where the town hall is being remodelled.

The town hall is often at the civic heart of a town, and in regional areas it would make sense for this place for community congregation to prevail, yet in many regions the influence of these buildings has waned. Along with the privatisation of the postal service and the repurposing of banks, our regional communities (like the cities) have lost many of the civic buildings that originally served them.

Historically the town hall was seen as a place for the decision makers’ orations, for musical and dance performances, debutant balls and the waltz, fundraising events, perhaps a pipe organ, emergency relief, protests, elections and free speech. Town halls located in NSW grew in number but then often filled with administrative functions, over flowing into other buildings and limiting community use. Later, in the mid-20th century many sat idle, looking for a new use after local government areas were merged and centralised.

Two halls recently looking to reinvent themselves are Maitland Town Hall and Lismore City Hall. Both places are regional centres, both on a river with a history of destructive floods and both amalgamated with neighbouring areas then proclaimed as a city, Maitland in 1945 and Lismore in 1946.

In the late 19th century the West Maitland Municipal Council advertised a design competition for a centennial hall, attracting thirty-five entries. These were judged by George McRae (Sydney Town Hall) and John Hennessy of Sherrin and Hennessy, Sydney. The winners were two young men from Oakhampton, near Maitland, James Warren Scobie and Arthur C. Lee who had formed a partnership in July 1888. The Maitland Mercury described the design for the town hall as, “Italian Classic … a noble edifice … and has an aspect of solidity, being in general treatment and detail of the pure Corinthian style of architecture…”.

Like all long-serving community facilities the Maitland Town Hall underwent change, additions and alterations. It suffered from flood damage and had several interior alterations. The adjacent ambulance station to the west was demolished for the new administration building, 1981-2 designed by McKenzie and Associates of Newcastle (once Thelander, Deamer & McKenzie of Maitland and Newcastle1) This Brutalist structure was set back from and apart from the original building, but connected to it at first floor level by a concrete and glass walled bridge.2

In 1890 the hall was licensed for public entertainment and proceedings, the stage was finished in 1891. A wide range of cultural and social events made it a focal point for West Maitland and its hinterland.3 Since those years the hall has hosted Dame Nellie Melba in 1909, Paderewski, Nellie Stewart in 1911, boxing in the 1930s, Maitland Repertory Society, the local Gilbert and Sullivan Society, dance and supper nights, vaccinations, flood relief, flower shows, public meetings, vaudeville, choirs, Meals-on-Wheels and politicians including Edmund Barton in 1898 and Robert Menzies in 1961. 4

The council chambers are still used by council for regular meetings and the smaller ancillary rooms are in regular use by community and training groups. The town hall has a flat floor auditorium with a moderate sized stage, regularly hired for use as a dance hall, function, exhibition space, school exams, ceremonies, assembly room and occasionally as a performance space. The auditorium floor is a rare surviving example of a fully sprung timber floor, excellent for dancing.

The current project to upgrade the auditorium and performance space is a collaboration between the council and the Government Architect’s Office, who also have provided specialist heritage services. It is being funded ($2 million) by the NSW Government through the Hunter Infrastructure and Investment Fund. The scope for the auditorium includes the stage house upgrade for safety, equipment upgrade and improved ease of its operation, new rigging over the stage, lighting, curtains and limited make-good refurbishment of heritage interiors. This project is nearing completion. The aim is to attract performing arts events, improve flexibility for the use of the space, all helping to maintain a valuable community asset and enhance its commercial viability. Having the new, very successful Maitland Regional Art Gallery across the street will help.

In 1960 the Stocks Park site was selected for the Lismore City Hall and Douglas G. Board of FJ Board & Son (Douglas) was chosen to design it. At the time of tender Mayor Alderman C J. Campbell demonstrated how things had changed since 1928 when he reassured the rate payers, saying “the proposed building would not be magnificent by any means, but it would not make extravagant use of the people’s money.” Then later balancing it with “there is little doubt that in this building we have the nucleus for the future cultural development of Lismore and its people.”

Local journalists tried to be positive. “The exterior has been kept almost severely plain… to avoid a ‘box’ appearance for the large building, all ground level walls have been recessed 11 feet to form colonnades.” The entry was made more interesting with the inclusion of a high level 81 ton folded slab canopy, referred to in the newspapers as a fluted portico. The new Lismore City Hall opened in January 1965.

The lower level interior finishes were robust, anticipating a flood. However, upstairs the foyer and auditorium featured vertical meranti wall lining with maple plywood rectangular panels and north coast hardwood parquetry floors. From the Opening Day Booklet we can note the pride: the building’s “acoustics were given expert treatment”, it was air conditioned, the main auditorium could seat 845 with 80 extra if required, the space below could sit 256, or 208 at tables and 80 in the theatrette, beside the Refreshments Kiosk. The Mayor forecast “Balls, Stage Productions, Orchestral Concerts, Ballet, Conferences, etc”, noting that there was a grand piano and specialised stage lighting, including cyclorama. The booklet also expressed regret that “Council, on the grounds of cost had to abandon its intention to construct a full stage house”. The good news came from the Minister for Lands and Member for Lismore who reassured teenagers that they “could perform the current dance craze -the stomp – without fear of stress to the structure”.

Community expectations changed, the hall ran down and it was severely damage by hail in 2004. It was on the brink of redundancy. Northern Rivers Performing Arts (NORPA) has been the Managers of the facility and the major tenant for about 20 years. This has been a cultural alliance between the council and NORPA, with shared goals for creating a cultural hub around the City Hall. NORPA pushed for an upgrade to facilitate more uses, local talent and attract performances to Lismore that rejected the hall as a suitable venue. The council sought funding and a design, and was successful with a Commonwealth Government regional infrastructure grant for approximately $4.9 million. Arts NSW provided $100,000 toward NORPA’s new theatre lighting.

The Lismore based practice Dominic Finlay Jones Architects (DFJArch) was successful with their submission. With the collaborative assistance of Phil Ward of Phillips Smith Conwell Architects, Brisbane (particularly for the auditorium and the acoustics) they undertook the project in 2012-13.

Their engagement with the council, other stakeholders and users identified the current shortcomings. The criticisms focused on very poor acoustics, extreme difficulties in importing a show into back-of-house, difficult inequitable public access and an inadequately small foyer (150 people and then overflowing). It needed to be more flexible, attract a wider range of uses and larger productions, high quality acts. The back stage entry was “just a door and railing, sometimes props and equipment had to be winched or craned up to the door” (above the floods).

The DFJArch team challenged aspects of the Brief, brought innovative and pro-active alternatives to the project, within the $6.3 million budget. From their statement, they carried out a detailed analysis of the building and identified under-utilised space; they did not pursue the new additions for the foyer but added comprehensive back-of-house infrastructure. They were very conscious about respecting the latent character of the original 1960s building, but also mindful that their designed additions needed to be clear, contemporary and complementary. They saw value in the existing fabric, took a re-use approach to “bring the building into the 21st Century with a relatively light hand.”  5

As examples of new possibilities, The City Hall recently hosted a medical conference and will stage Kinship by Bangarra Dance Theatre in November.

DFJArch believe that Lismore City Hall’s acoustically overhauled four distinct multi-use spaces, supported by industry back-of-house facilities, have seen it realise its potential as the Northern Rivers’ pre-eminent performance venue. Others agree, the project has been awarded three architectural awards, one engineering excellence award, a commendation from the property industry and acknowledgement from the MBA.

Perhaps Town Halls are a community’s symbol for coming of age, like a pre-19th century social debutant, or the 1970s couple who took dancing lessons and borrowed a suit for the Ball. For a town or city it can present prestige or status and acknowledge success.

As a community meeting place the town hall faces the competition found in local clubs with large auditoria, dozens of new school BER multi-purpose buildings and connected communities, the inventiveness of local libraries in engaging with community or the impressively diverse activities offered, for all ages by regional art galleries.

Town halls need to identify their contemporary community role and define their purpose, with a view to filling any gaps and maintaining their importance, particularly in this user-pays era. 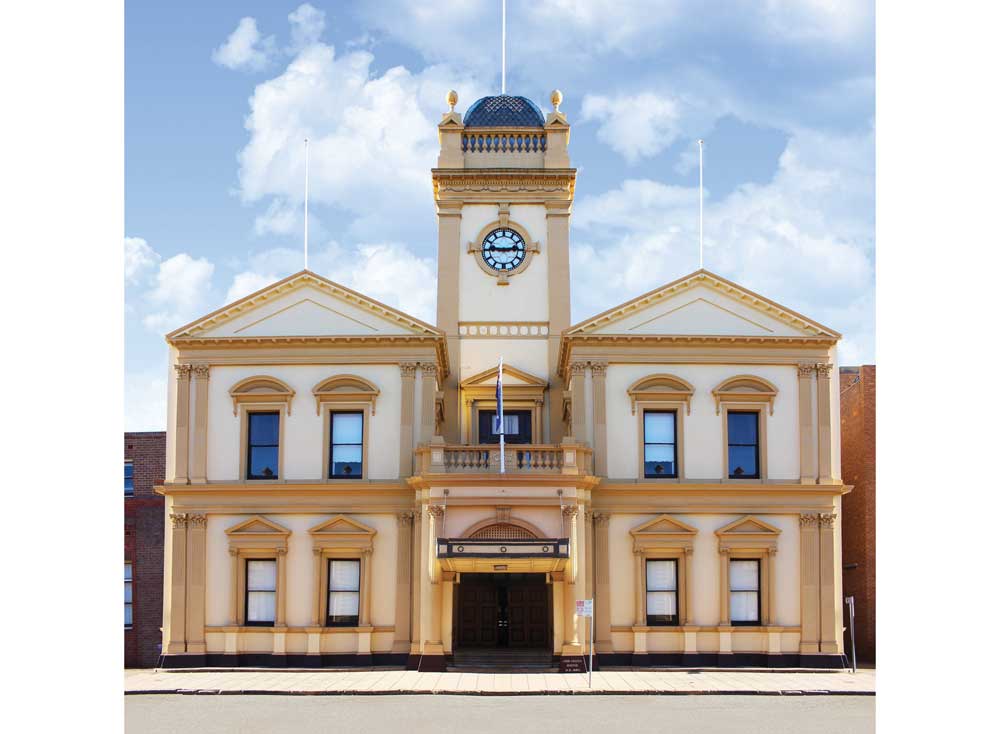 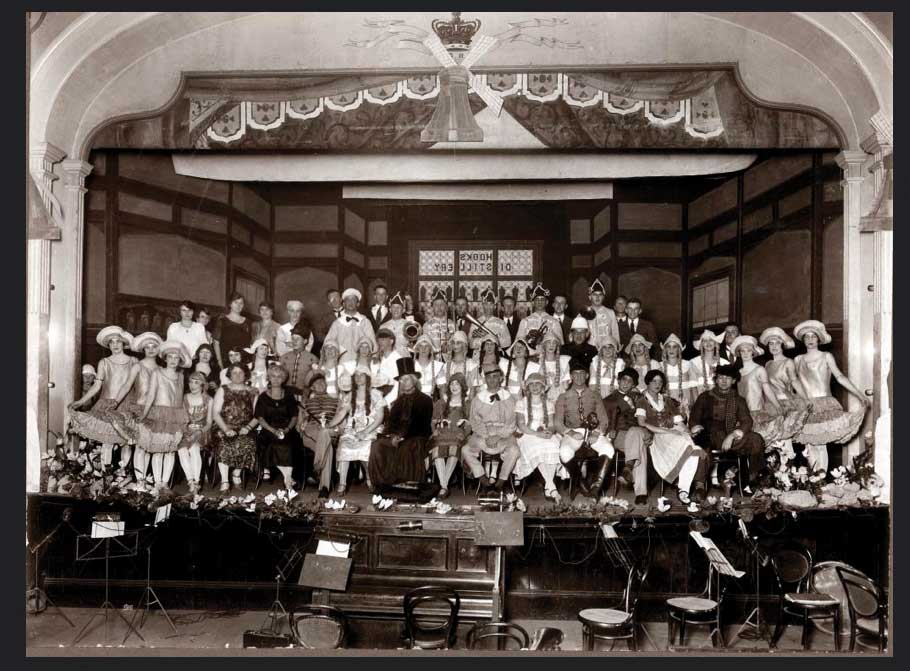 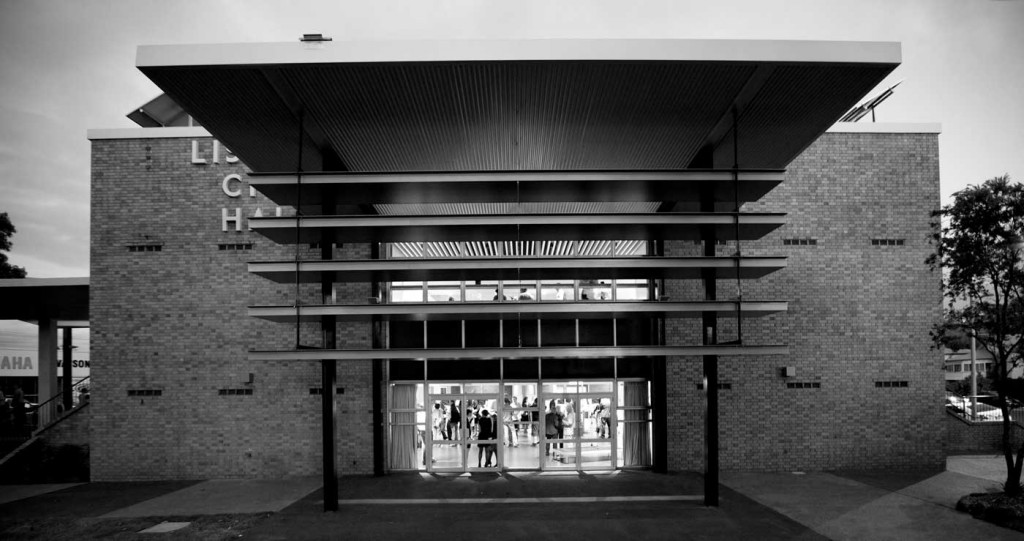 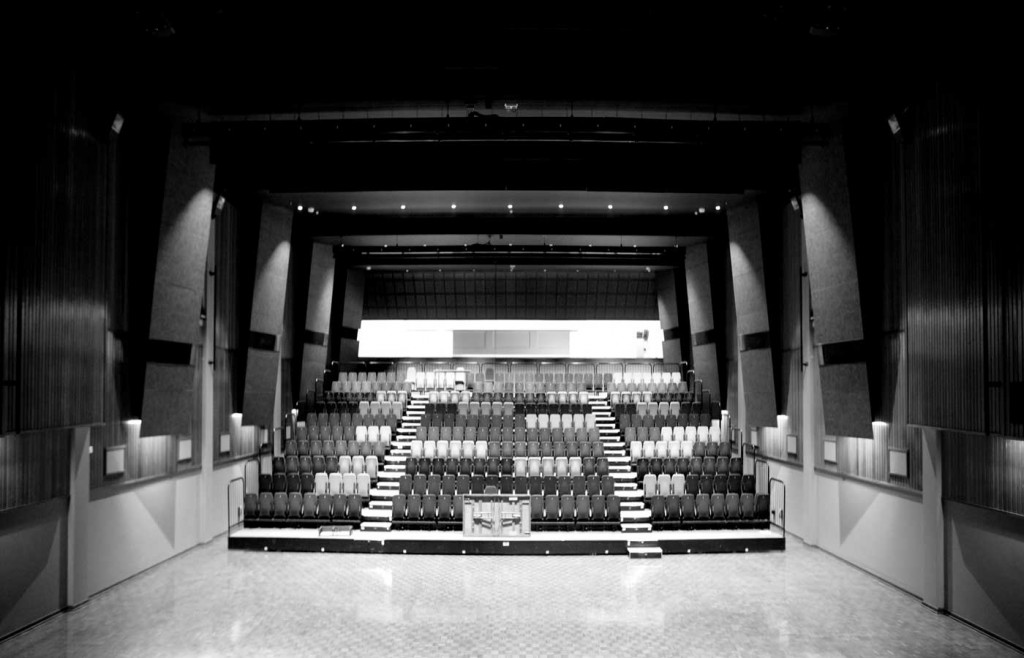