In 1962 Lief Kristensen wrote to Jørn Utzon asking for a position on the Sydney Opera House in Sydney. He arrived in Hellebæk just as Utzon who was about to set off on a walk in the nearby beech forest. On his return, Utzon confirmed Leif Kristensen’s appointment, but neglected to inform Olaf Skipper-Nielsen, his site architect at Bennelong point. When Kristensen showed up unexpectedly after a long sea voyage from Marseille in early 1962, Skipper-Nielsen, who lacked instructions, turned him away.

Kristensen contacted Bill Lucas who referred him to Peter Hall, a senior architect in the Government Architect’s Branch, who promptly appointed him as his personal assistant. The Labor government of the day was committed to building infrastructure and developing social and cultural capital which meant new schools and hospitals and a commitment to meeting the neglected needs of mentally handicapped children.

Kristensen’s direction as an architect was set early. He was born on June 17, 1935 at Agger, a tiny fishing village on the west coast of Jutland. Accepted in the 1956 intake of thirty-five to Copenhagen’s renowned Royal Danish Academy of Fine Arts School of Architecture, he left in the fourth year, and registered as an architect in November 26, 1964, on sitting the NSW Architects Registration Board examination. Kristensen joined the prominent office of Erik Ejlers and Henning Graversen. Here he received practical experience as chief assistant under Erik Eklers making sketch projects and detailing for a varied range of challenging projects, principally schools, aged care accommodation and hostels for the mentally impaired, one of which was for Greenland. At such an early stage, Kristensen’s confidence and precocious facility with a pencil manifested itself along with his interest in social architecture.

Kristensen’s Danish background and experience, made him an obvious choice for the new Marsden Hospital for 300 severely handicapped children at Parramatta. Working closely with Dr Alan N. Jennings its director, Kristensen produced a world class facility which received the coveted Sir John Sulman Medal from the NSW Chapter of the RAIA for 1969-70. Marsden is arguably the finest example of Danish Modernism completed in Australia. It is impressive for a variety of reasons: predominantly in cream brick the complex of buildings is broken down into individual units that impart a special humanism to what otherwise might have been a confronting and alienating institution. Marsden reflects the highest qualities of Danish Modern design such as you find in the Louisiana Museum, while, at the same time drawing on Denmark’s unique folk architecture tradition.

Kristensen was a mature designer when he arrived in Sydney. Marsden, like Utzon’s Kingo courtyard housing is composed of repeated floating horizontal and vertical wall elements that move in step around the central open space in a staggered chain, with Utzon’s lake replaced by an oval. We find a similar sense of community in a democratic society which has found inspiration in nature. At Louisiana, as much as possible, the site is left unoccupied by buildings to preserve the Iron Bark trees. Landscape and architecture are united via a series of courtyards that reduce buildings to a necklace of small, non-massive, units that overlook Toongabee Creek.

Kristensen left NSW Public Works in 1969 for private practice to further his involvement in social architecture for the aged. A number of projects were completed, notably, Towradgi Park Aged Care Facility, Julianna Village at Miranda for Dutch migrants, Norby Retirement village, and Abel Tasman village. Julianna Village received a 1982 RAIA Merit Award for its response to aspects of individuality and community, its intimate scale and measured pace—in the words of the Jury: “It just seems to do all the right things.”

In the late 1980s, Kristensen renewed his connection with the Sydney Opera House in a series of accommodation reviews the most significant being the TheatreWorks performing arts museum proposal 1989-95, for a high-tech interactive performing arts museum, a scheme for a permanent exhibition space adjacent to the Royal Botanic Gardens, 1989, The Studio, 1995-98, Western Foyer connection between the Playhouse and Drama Theatre, 1989-98, the Playhouse stage and backstage upgrade, 1989-92, and Concert Hall Performers’ Assembly Room, 1989-1998.

With second wife, Christine Wing, in 1967 Kristensen moved to 5 acres of bushland at Arcadia, a Sydney version of Wright’s Broadacre on Fagans Road, and built a house and architecture studio there. With brick walls and floors, and timber lined tile skillion roofs, it is a wonderful house that, on the inside, feels as though someone was thrown a protective brick overcoat around your shoulders. A true terrace-house, it has an outside terrace under an explosion of purple wisteria which, in summer, became the focus of domestic living. It is a truly beautiful masterpiece, easily, but incorrectly mistaken as Sydney School, it harks back to Danish values that Kristensen never entirely abandoned.

Kristensen was not given to compromise. New acquaintances were struck by the confusing mixture of European sophistication and the cheeky posture of working tradesman. At school, girls compared him to Clark Gable. The journey from Agger to Arcadia left Kristensen largely unchanged, and much the same is true for his architecture. 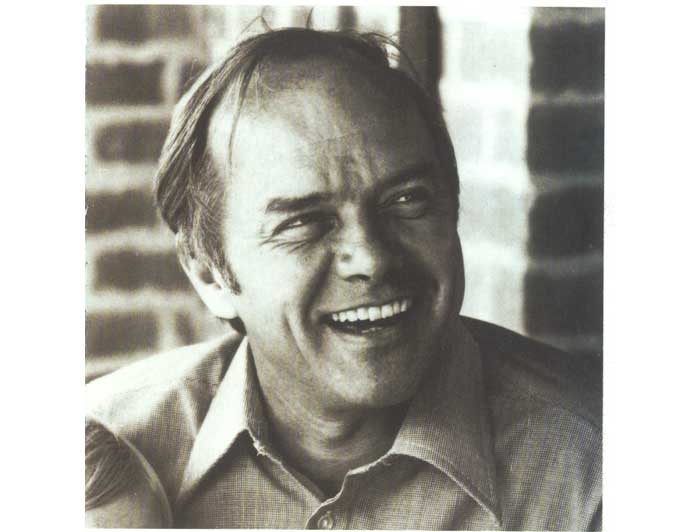