Last year I had the pleasure of assisting Architext Bookshop manager Anne Proudfoot in the store where she had worked for the last twenty-eight years. In December 2015, the Institute announced that they would be closing both Architext stores in Sydney and Melbourne as they were no longer sustainable businesses. Shortly after the closure, we had lunch at the Botanic Gardens Restaurant, where we admired the building1 and talked about her time at Architext, how things changed and what could have been done to save it.

Ricardo Felipe: Could you give a brief history of Architext Bookshop?

Anne Proudfoot: Architext began in 1981 in Bouverie Street, Carlton near the University of Melbourne. It was the brainchild of [a group of people].2 The purpose of the store was to offer members and students access to architectural publications, both professional and technical. At the time, the Institute was also publishing monographs on Australian architects and practice texts, so the bookshop was a way of promoting these.

The Sydney store came into being at Tusculum Villa in 1987, along with the NSW Chapter, which was next door in the newly completed building designed by Durbach & Levine. We later moved to the new building, as the space offered better lighting and visibility to passing traffic.

What services did Architext provide to Institute members and the general public?

The bookshops were entirely owned by the members as a service: we offered discounts on all titles, made special orders, attended conferences and trade fairs, held book launches and occasionally visited some universities and architectural offices as a pop-up store. We also attracted a wider audience who appreciated our specialised range on housing design.

And the Sydney bookshop had close ties with the Melbourne store as well.

Yes, we were always on the phone to each other, keeping each other supported. When there were requests for something in Melbourne, we could transfer it down overnight. It was like having an extra warehouse and we could share our stock. In the final weeks, I understand that Published Art did a surprise buyout of all the remaining stock. Yes, that was in the last two weeks. We had a sale continuing on from late January and then Julian [Brenchley] and Rebekah [Lawson] from Published Art came in and offered to buy our remaining stock. And they want to continue the tradition of a specialist architectural bookshop.

They are opening a new store in Surry Hills on street level. They intend to grow it from what it has been. For two years it was on the first floor of where their office was, as he’s an architect. And I believe they are going to stock Danish design products as well.3

Will there be a new model for an Institute bookshop that may emerge?

I can’t see that happening in the near future. But who knows, in the next few years things may return, demand might come back and there may be a merger with other professions. In this competitive market with Amazon and Book Depository, it is hard to sustain just one specialist subject, without having a secondary form of income.

Niche bookshops like Architext, act as cultural hubs for the access of new ideas and contribute towards progressive change as well as the chance encounter with peers. I remember that people would often browse and chat in the bookshop before an event at Tusculum. Can you say more about bookshops as cultural hubs?

Well, they are very meaningful in that they give people – even if they are not aiming to buy anything – a chance to to widen their knowledge and get inspiration, or have a break from working in their studio or get random ideas.

How have things changed over the years?

In the last few years, my customers had been discerning and discriminating. There was less interest in coffee table, flashy books that some publishers have produced in the past, and more emphasis on books of quality, meaning and content. Like Public Sydney by Peter John Cantrill and Philip Thalis. I was thrilled to have it in the shop and it is an example of what Australian publishing and our authors can produce. … We were always able to courier and post things out, but a good website would be a key factor to any business or bookshop, to really facilitate mail orders so that people needn’t come in.

In hindsight, besides a new website, what could have been done to prevent the closure of Architext?

I would say involving the customers and the members more … more ownership by the architects in the bookshop. So there could have been some ideas come forward to save it. An awareness to the fact that it was struggling in the last couple of years. But it comes down in the end, to that there weren’t enough people buying regularly. Younger architects don’t seem to need the book as a resource anymore. That is the big change I’ve noticed. The internet does really bring a lot of information that you would have found in a book. It doesn’t replace it but it does devalue it.

I think the bookshop as an entity … people are feeling the losses and are coming back to the book.
Readings is opening up two new stores in Melbourne, and it was recently awarded International Bookstore of the Year [at the London Book Fair].

Well, it is no doubt that both you and Architext Bookshop will be missed. What are some things that you will miss?

Conversations with people … and the sometimes quite tricky requests. I love chasing down a burrow for a challenge. Especially things like when you feel part of the building [process]. You see a building being built and you know that you may have helped that firm find a book, which may have helped them build that building. In an indirect way, I feel like I was part of the excitement.

And what is next for Anne Proudfoot?

If I had lots of money I would love to start afresh and stock exactly my favourite books, like Public Sydney. I would just start from scratch with only the best.

1. It was later discovered that the Botanic Gardens Restaurant was designed by the GAO (project architects Andrew Andersons and David Churches in association with Ancher Mortlock & Woolley) in 1978. Incidentally, Anne had recognised Ken Woolley’s handiwork over lunch.
2. Anne later recalled that Architext was originally set up by the following people in Melbourne: John Dean, National Education Director, RAIA; Celia Lamprell, who became the first Bookshop Manager; Michael Peck, National President, RAIA; Judy Vulker, RAIA Education Publications Director; and Robert Caulfield, Archicentre Director.
3. Published Art will be opening their new Sydney store in mid-June 2016 at Mary Street, Surry Hills in collaboration with Normann Copenhagen (their first Australian concept store). Published Art are expanding their architectural titles and will be filling the gap that the closure of Architext left behind.

Archibooks
On 16 May, the National Office Canberra made this announcement about a new service called Archibooks:

In recognition of the importance of architectural books both as an inspiration and as an essential tool for the practice and appreciation of architecture, the Institute has sought out alternative suppliers that we believe come close to meeting the high standard previously set by Architext. All of these stores have both a physical and online presence with extensive catalogues of architectural and built environment titles. Between them we trust that you will find what you are looking for. For the more obscure or rare titles feel free to contact the recommended stores to place a special order.

The current participating stores are: Boffins Books in Perth, Folio Books in Brisbane, Metropolis in Melbourne and Published Art in Sydney. Each of these stores is offering Institute members the same ten per cent discount previously available to members through purchases from Architext. 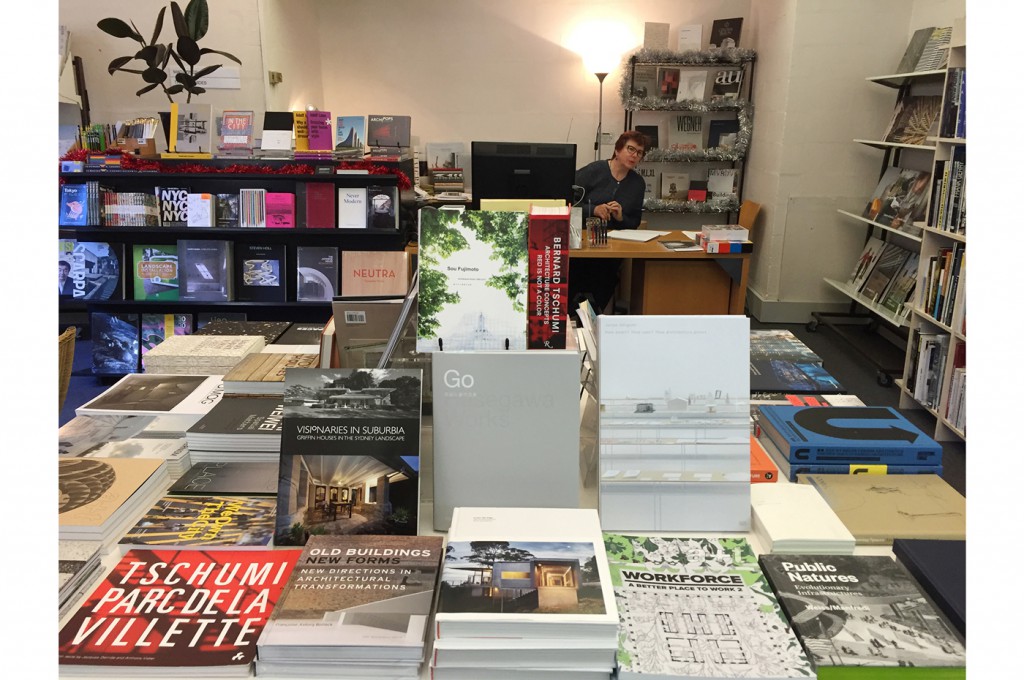