The Goods Line: a New Spine for Ultimo

As a director at ASPECT Studios, Sacha Coles has worked on numerous landscape architecture and urban design projects in Sydney. Sophie Solomon spoke to Coles about one of his most significant projects – The Goods Line – to find out what strategies and considerations were taken in the design of this urban transformation.

Sophie Solomon (SS): Could you frame the process of strategic design around your Goods Line Project ?

Sacha Coles (SC): The initial brief for The Goods Line project was to create a shared path connecting Central Station to the new convention and exhibition precinct in Darling Harbour. Our strategy was to look at the potential influence of the project on the City’s south – Haymarket, Chippendale and Ultimo – which is going through a dramatic urban transformation. The area has attracted student housing, start-ups and innovators, [all] searching for old affordable space in close proximity to the city fringe, but it has a scarcity of useable, open space. There are the universities (UTS / TAFE), the Powerhouse Museum and the ABC. Additionally, the area around The Goods Line is one of the hottest places in the city because of the lack of green spaces, creating the urban heat island effect.

With consideration of this we unpacked the potential of The Goods Line as a connector, not just from A to B but to a new network of public experiences around and through the buildings and the precinct. The Goods Line is a former railway line, built in the 1850s with major heritage significance. It was originally delivering a lot of resources into the city from Western New South Wales. It has a great historical significance in terms of industry and through the project we wanted to keep this idea of industry alive. We looked at what the new industry is for this area which is around creativity and innovation. The underpinning to our whole project was to take this piece of industrial infrastructure and turn it into social infrastructure, creating a new spine for Ultimo.

Further to our study of the project site, we extended the brief to look at what other opportunities were made possible. It could be far more valuable to the public if we were able to reconnect the streets that currently terminate at The Goods Line. Through the design process we have been able to re-open two city streets – McCarthur and Mary Ann Street – providing much needed permeability to Harris Street a formerly disconnected high street. We did a strategic study to look more broadly at the existing open space projects around the site. This was not required by the brief but it gave a framework to what The Goods Line could offer as part of a wider open space network.

SS: Is it all government owned land?

SC: Sydney Harbour Foreshore Authority (SHFA), our client, is the main land owner. Other landowners and key stakeholders include TransGrid, Rail Corp, UTS, TAFE, the Powerhouse Museum and the ABC. From the outset there have been multiple agencies and influences responsible for setting agendas, briefs and aspirations for what the site could be. It is a whole of government project, there are many champions of this project and it has been a highly participatory process.

SS: How is the project funded?

SC: The Goods Line (north) is funded by the state through SHFA. We have advocated to extend The Goods Line beyond its current project boundary and funding will need to be secured to enable future stages and connections.

SS: Are you working collaboratively with other consultants to deliver the project?

SC: The initial design process was very collaborative, both with our architects – CHROFI, and the participatory design process with our steering committee. Whilst ASPECT Studios has lead the project, the design partnership with CHROFI has produced a far more interesting process and hopefully a more accomplished outcome for the public.

SS: How do you relate this project to other projects you have completed?

SC: The Goods Line is a highly programmed public spine. Because of the urban density within this area, creating inclusive and flexible spaces are a big agenda for us and again we are huge advocates for social equity.

The Goods Line is somewhat unique for us as a project type and not immediately relatable to our previous works beyond material choices. It does not sit easily as a landscape type. It is part urban park, plaza, walkway and campus spine. It is all these things and yet hopefully it has a strong identity of its own, as a generous public space which has knitted together a formerly disconnected city spine. 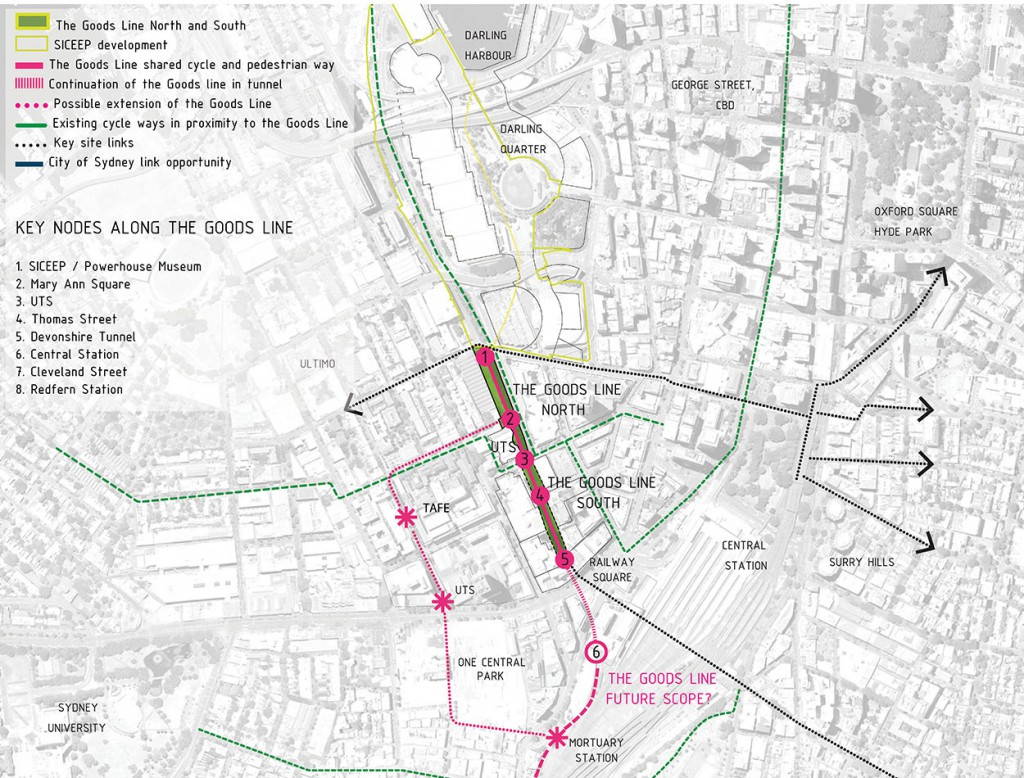