Focus The commissioners and districts of the Greater Sydney Commission. Text: Murray Brown

Breaking down the district planning process that will guide the city’s productivity, environmental management and liveability

The Greater Sydney Commission was created by the Baird Government last year with the support of the ALP, but not the Greens. Its primary task is to direct the planning of the Greater Sydney region, comprised of six districts.

The Commission has not started with a blank page. The first comprehensive plan for the region was the County of Cumberland Plan (1948), followed by the Sydney Region Outline Plan (1968) and Sydney Into Its Third Century (1988). There have been also several iterations of the Sydney metropolitan plan over the past three decades.

The goals of the most recent iteration, A Plan for Growing Sydney (2014), are:
– a competitive economy with world-class services and transport;
– a city of housing choice, with homes that meet our needs and lifestyles;
– a great place to live with communities that are strong, healthy and well-connected; and
– a sustainable and resilient city that protects the natural environment and has a balanced approach to the use of land and resources.

The NSW Chapter was a strong advocate for regional planning in Sydney during the consultation process for the O’Farrell Government’s new planning legislation in 2012/2013, abandoned because of the community backlash against code assessment. In advice to then Planning Minister Pru Goward in 2014, we recommended the Western Australian Planning Commission as an appropriate model for the proposed Greater Sydney Commission.

The shape and functions of the Commission were in fact inspired by the Greater London Council. But it has a number of unique features and is therefore being watched with great interest by urban planners around the world.

The Commission’s chief executive is Sarah Hill, former PIA NSW president and Hill PDA director. The chief commissioner and CEO sit on the Cabinet Infrastructure Committee and advise on infrastructure priorities for the Sydney region.

The Commission has an important cross-agency role. Its aim is to cut through the bureaucratic silo mentality and incorporate the planning work of key departments to create a better integrated Greater Sydney. The secretaries of Transport for NSW, Planning & Environment and Treasury are ex-officio members of the Commission and agency officers from Infrastructure NSW, Education, Health, UrbanGrowth NSW provide regular input into the Commission’s work.

The first major task of the district commissioners is to coordinate the preparation of a plan for their district. The plan-making functions of the Department of Planning & Environment have been transferred to the Commission for this purpose, but the Department retains responsibility for State Environmental Planning Policies (SEPPs).

Each district plan will be high level in its scope. It will identify urban growth centres and priority precincts, but not drill down into detailed planning for each of them. In line with the broad goals of the metropolitan plan, urban design amenity and quality will be key elements of the plan. The Office of the Government Architect has already had discussions with the district commissioners on this aspect of the plan.

In a discussion with the NSW Chapter’s built environment committee earlier this year Dr Dearing has emphasised that the district plan making process is both bottom up and top down. Councils’ existing strategic plans are useful reference tools that help in determining priorities for the district in delivering on the goals of A Plan for Growing Sydney. She has had several meetings with council planners to determine the broad shape of the plan; she is encouraging the councils to look broadly at the future shape of the district as a whole.

Robust data sets are being prepared to encourage evidence-based district planning. The Commission has released the first studies that provide details on how Sydney is working and the likely shape of its future.

This suite of documents and reports was developed by the Department of Planning and Environment and external consultants. The reports provide facts and figures about each of the districts and analyse the drivers and barriers to economic and employment growth. Further studies will be added as the Commission’s work proceeds. 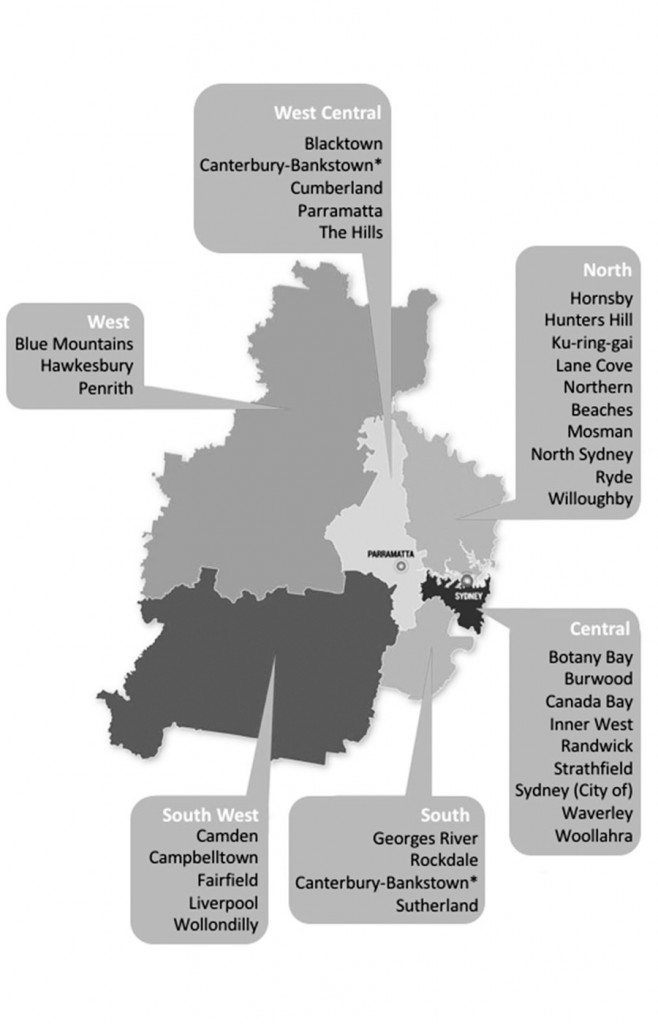