An innovative solution from Tensile Design & Construct has proved integral to the cost-effective installation of a green wall façade in Rushcutters Bay, Sydney. Belinda Smart reports.

Tensile Design & Construct has built a reputation for providing innovative solutions to architectural challenges, in particular through the use of lightweight tension solutions, so it’s not surprising that the company was approached when issues arose around the construction of a car park for The Advanx Apartments development in Rushcutters Bay.

Tensile founder Peter Bottero confirms the company was brought on to the project by builder FDC Construction when the developer’s plans for an underground car park had to be shelved.

‘Because Rushcutters Bay is in such a low part of the Sydney CBD, the water table was about one metre below the ground, so digging down was going to cost an enormous amount of money. To counter this problem, it was decided to create an above-ground car park.’

Located in a dense urban environment, an aesthetically unappealing car park clearly needed to be beautified, however the screening method first proposed, a fully planted green wall, proved too expensive.

The initial structural design of the façade prior to Tensile’s involvement entailed steel posts spaced around 1.8 metres apart with infill between the posts. Tensile Design & Construct redesigned and reconfigured this element to create a light weight, economical solution using Webnet mesh.

‘We pulled out the steel posts to a distance of eight metres and installed our mesh between them,’ says Bottero. ‘The product we used is Jakob Webnet Mesh, a stainless steel tensioned mesh.’

A key challenge was to integrate an art work component into the design, he adds. The work, titled The Footprints and created by Korban Flaubert, was intended to be reminiscent of the original dirt track used by Aboriginal people in the locality.

‘The Footprints comprised 600 individual pieces with a collective weight of three tonnes,’ says Bottero. ‘So, when you factor in the weight of the plants and wind forces, we were certainly pushing the limits of what had been done before. It was a challenge but we took the whole job on, project managing it end-to end. We undertook the design work, structural steelwork engineering, fabrication, co-ordination of the artist and the final installation. We also worked with planting specialist Junglefy, who operated as a subcontractor to complete the planting and related elements such as irrigation.’

With structural installation completed in under a month, Bottero describes the final outcome as a cost effective screening element that met the requirements of both the builder and the developer.

‘In particular for the developer, we achieved significant cost savings. By using a tensioned solution we were able to reduce the steel by half if not two thirds. The cost of digging down to create the car park would have been considerably higher than the solution we arrived at, so the builder certainly came out in front.’

‘The structure we created is eight metres tall and 90 metres long and wraps around three sides of the building, so it’s a significant presence in the locality. The design also has functional benefits; the plants for the green wall can be accessed from inside the building, meaning they can be watered and maintained easily without the need for external equipment.’

The cooling effect of the green wall thanks to solar shading is another key outcome of the installation. ‘Reports indicate that a green façade with 70% coverage of leaves for each square metre can offer a 90 per cent reduction in long wave radiation, so there are clear environmental benefits.’

Perhaps the real significance of this project in architectural terms is the innovative use of mesh as a substrate, on which further embellishment can be added.

‘We’re increasingly finding that Webnet mesh can be used as a strong but lightweight substrate,’ says Bottero. ‘You can use it as a skin to wrap the building but there are then many possibilities to make a really individualised design statement, through the addition of planting, artwork and lighting.’ 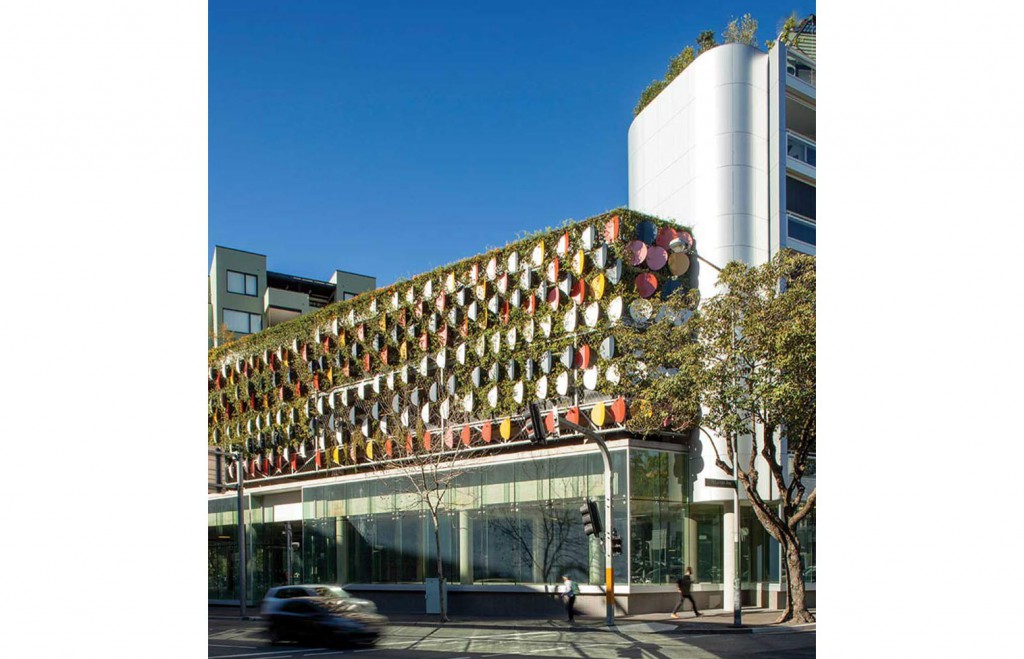