The Colloquium: Growing a Greater Sydney

Hosted by the ABC’s Tony Jones, the 2014 Sydney Architecture Festival’s keynote event, The Colloquium: Growing a Greater Sydney, was a unique opportunity to hear from government and business, as well as architecture and design industry experts intimately involved in determining the future of Greater Sydney. Callantha Brigham and Vanessa Pilla review the day and assess its outcomes for the profession and future planning of Sydney.

The industry highlight of this year’s Sydney Architecture Festival, The Colloquium, was a day-long immersion into several of the key challenges facing global Sydney as its centre shifts decidedly west. Hosted by the ever-dapper Tony Jones and located at Parramatta’s Riverside Theatre, the event was refreshingly devoid of the microcosm that often infuses architecture events (thanks to its curators Andrew Nimmo, Joe Agius and Peter Salhani). Instead, The Colloquium (meaning an academic event or seminar) physically transported more than 150 members of the profession into the centre of contemporary Sydney, to hear 14 speakers from private practice, research, academia and government pose a series of big-picture questions (and give some potential answers) into what it could take to actively realise a ‘greater’ Sydney.

The day was centred on three key themes: Growing, Connecting and Improving. The Lord Mayor of Parramatta, Scott Lloyd opened the day with the statement ‘Failing to plan is planning to fail’ (Benjamin Franklin), while Lucy Turnbull, Chair of the Committee for Sydney stated to those present that planning for the whole of Sydney currently involved 41 local government areas (LGAs) and that governance reform was necessary to make local government ‘fit for the future’. The first speakers established the underlying challenge posed by the day: that Parramatta sits at both the geographic and demographic centre of Sydney, and to realise the global Sydney of the future, improved connections with Parramatta and Western Sydney are vital.

GROWING
“Cities are the engines of economic growth,” stated Paul Donegan from the Grattan Institute, reminding the audience why cities are important and how their location matters. Since 1901 the Australian economy has been shifting from an agricultural focus to manufacturing (late 1960s), and more recently to an educated and skilled knowledge economy (2011). This move to knowledge-based employment brings with it place-based winners and losers. Parramatta has been stated as an important centre for employment; however, it and other employment hubs cannot currently compete with the sheer number of knowledge-based jobs that choose to co-locate (for efficiency and productivity) in the Sydney CBD. For the majority of people in Western Sydney, this geographic disjuncture between their place of residence and work leads to long commuting times and congested transport connections (car and rail), and creates a negative impact on family life and the economy.

Bob Meyer, Director of Planning at Cox Architecture, spoke to the historic context of Sydney’s spatial plan with its monocentric focus radiating from Sydney’s CBD. He explained why the monocentric model has broken down over time, but remained optimistic that Parramatta’s access to an educated labour force could be improved to rival Sydney’s CBD in the future in terms of job numbers. Philip Graus, Director at Cox Architecture, went further,  describing how the spatial plans have contributed to the jobs deficit in Greater Sydney. An obsession with housing targets has usurped the need for ‘better parks, better transport, better jobs’ and more activity; needs that are greater ideals for a ‘city that is bigger and better, not bigger and bigger’.

The first plenary session on ‘growing’ Greater Sydney framed a number of problems: the shift to a knowledge-based economy; the deficit of jobs in Western Sydney; and the need for new ways to assist people to access jobs. While Parramatta may be well positioned to close the gap between a growing population and the location of jobs and capture a labour force from a 360 degree catchment, for this to occur an increase in knowledge-based employment to rival that of Sydney’s CBD would be required, with one eye ever watchful that this city-making also brings qualitative life improvements to those living in Western Sydney.

CONNECTING
The second session, Connecting, began with a ‘new’ philosophy for urban regeneration from UrbanGrowth NSW Head of Strategy, Julian Frecklington. Frecklington described UrbanGrowth’s involvement in six large-scale brownfield projects located across New South Wales, which underlined a clear departure from Landcom – its former greenfield-focused identity. With a new ‘visionary’ and ‘courageous’ governance model to underpin delivery, each of these projects is intended to transform city living through the redevelopment of government land.

From this ambitious beginning, Ross De laMotte, Principal of Hassell, then spoke to the human element of designing infrastructure and the importance of the design process in bringing different disciplines together to enable those very rare moments of ‘transcendent’ public architecture. De la Motte reminded the audience of the importance of patronage and introduced the concept of infrastructure as both a social and architectural opportunity. David Holm, Director at Cox Architecture, picked up this thread with a specific focus on airports, presenting a number of international case studies that demonstrate how and why airports that go beyond the basic provision of a transport interchange and incorporate social infrastructure can support the creation of work and community, and if supported by connecting infrastructure can change cities for the better. While not explicitly mentioned by Holm, the implications for a new Sydney airport at Badgerys Creek  –  announced by the Federal Government this year  –  were clear: transport infrastructure projects of this scale are a once in a lifetime opportunity to build the ‘urban cathedrals’ of tomorrow, and wouldn’t it be great to get it right.

IMPROVING
The third session of the day commenced with the NSW Government Architect, Peter Poulet’s interesting take on the role of the architect, today’s `Wile E. Coyote’ of rapid prototyping, in solving the wicked problems which beset cities. Rod Simpson from the University of Sydney, provided an apt demonstration of Poulet’s thesis, presenting his alternate view as to how the polycentric city could best be unfolded through an expanded city core and a transformational metro system centred on Camellia in Western Sydney. Simpson’s radical ideas challenged previous speakers and were delivered with a broader call to arms for the profession to loosen up on design excellence and focus on championing urban excellence.

David Borger, Western Sydney Director of the Sydney Business Chamber, followed Simpson’s lead in returning discussion back to Parramatta. Concern for social and economic inequality underpinned Borger’s call for the generation of ‘smart jobs’ in Western Sydney, a point aptly demonstrated through the example of a PhD-educated woman who became excluded from knowledge sector work due to the incompatibility of Sydney CBD commuting times with local school and childcare hours. In contrast, the success of Westmead as a ‘talent magnet’ was highlighted; an area with three times the PhD employment rate of other areas in Sydney, yet lacking connectivity and vital links to TRADE with Parramatta and Olympic Park. [As an aside, Parramatta to Olympic Park is Borger’s preferred route for the recently announced Parramatta light rail.] Potential for future jobs growth greatly enabled by rail infrastructure and hopes for a thriving community surrounding the new Badgerys Creek airport, reinforced the importance of earlier sentiments expressed by De laMotte and Holms.

The Assistant NSW Government Architect and Harvard University Loeb Fellow Helen Lochhead closed the third session with an overview of international mega projects and a sobering reflection that 75 per cent of infrastructure needed in the future does not exist today. A ‘business as usual’ approach is simply not an option for Sydney and while Premier Mike Baird might claim that New South Wales will become the ‘infrastructure CAPITAL of the world’, a key finding from Lochhead’s research is that infrastructure for cities first needs to be led by a strong vision, shared values and a clear understanding of needs and aspirations.

A Q&A style panel discussion moderated by Tony Jones provided a dynamic close to the day. Newcomers, Geoff Lee, Member for Parramatta and Barbara Schaffer from the NSW Government Architects Office, joined Simpson, Lochhead, Donegan and Borger to reflect on key themes and respond to questions regarding definition of community, the politics of government priorities and carbon consequence. It was unfortunate the format of this segment was limited to the end of the day. Jones was both an energetic MC and probing inquisitor, and the event, with an audience filled with bright-minded professionals and Western Sydney locals would have benefited from more opportunities for interaction and engagement.

The Colloquium suggested that the future ‘greatness’ of Sydney will increasingly rely on a diverse mosaic of transport options, green armature, community engagement, job redistribution, design excellence, political patronage, and creative FINANCING. However, as stated by Lucy Turnbull, ‘lots of conversations are needed to make a city great’ and in some ways it was disappointing more of Western Sydney potential patrons were not in attendance to challenge and engage in the rich discourse offered throughout the day. The Colloquium was, however, a great contribution to the conversations needed to create a strong vision for the future of Sydney and suggested many paths forward for those in attendance.

Callantha Brigham is an architect working in the urban design team at Parramatta City Council and Vanessa Pilla is an urban planner and coordinator of the Western Sydney Leadership Initiative. 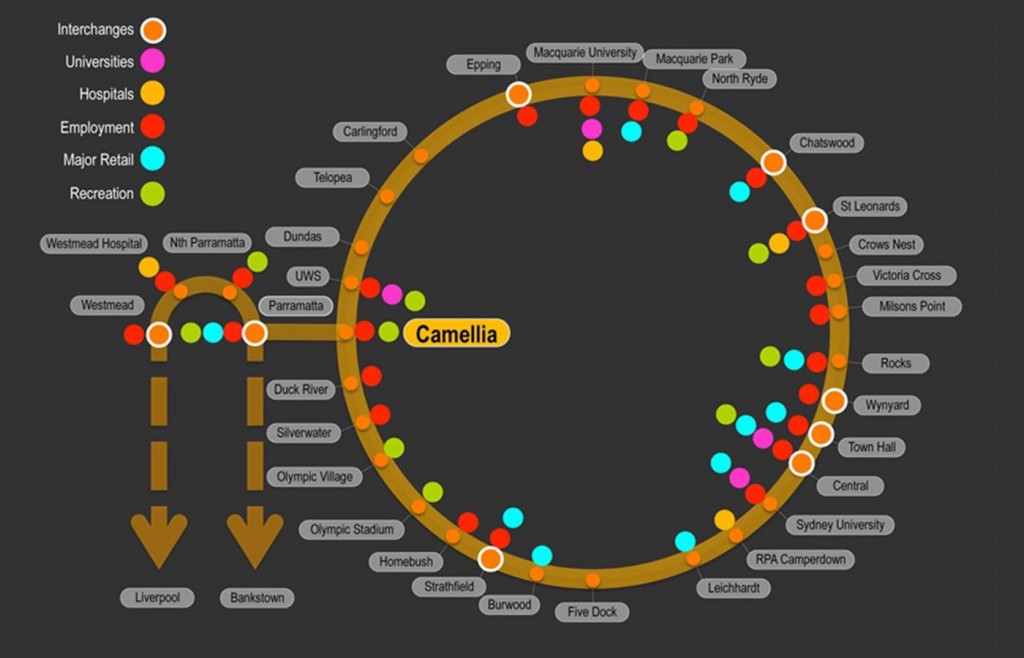