A Home for Every Taste: the NSW Small Homes Service

A HOME FOR EVERY TASTE:

The Small Homes Service (NSW) was intended to provide plans for small houses – plans that were architecturally correct, economically built, and correctly planned – expanding the opportunity to experience architecture to all. Dr Noni Boyd, NSW Chapter Heritage Officer investigates the history of the scheme and its impact on residential design across the state.

The Small Homes Service instigated in Victoria by Robin Boyd and The Age newspaper in 1947 was not the first such plan service in Australia; the NSW Institute of Architects had operated a similar scheme in Sydney during 1926‒1928. Proposed by the Chapter President Professor Alfred S Hook, the scheme was modelled on an example in Minnesota, US. Notes pasted into the Chapter minutes explain that the NSW Small House Plan Service was intended to provide ‘plans for small houses which shall be architecturally correct, economically built, and correctly planned’. The Australian version of the service, Hook noted, was unlike American schemes: it was open to all architects and it wasn’t just a money-making scheme, but a service to the community. Florence Taylor of Building Magazine, who in 1926 had promoted the extension of the service to country New South Wales, later demanded its closure. By February 1928 it was apparent to Taylor that the service had been instrumental in creating hardship. Homeowners did not see the need to hire an architect. Architects felt that the Institute was undercutting them and there were reports of resignations.

The idea of a small homes service was reintroduced in the late 1940s. The Sydney Morning Herald and Home Beautiful lobbied the NSW Chapter to establish a service along similar lines to that established in Victoria. In New South Wales building costs had doubled between 1939 and 1946 and building materials were very hard to get. There was up to a two-year wait for bricks in areas with no brickworks, such as Hornsby and Pittwater.
By 1952, builders weren’t even bothering to tender. It was not until late 1952, when building restrictions had finally been lifted, that the NSW Chapter reluctantly agreed to consider conducting a similar service. Prominent Sydney architect, Morton Herman flew to Melbourne to see the Victorian scheme firsthand. The Chapter had asked two architects, John Coates and Charles Madden, to investigate and their advice was that the time was not opportune.

In September 1952, designs from the Victorian service were published in the Sun Herald alongside a modest timber house designed by Hans Peter Oser for Walter Magnus at Blackheath.  The press seemed to have tired of asking and had simply announced that a New South Wales service would be commencing before the Chapter had finalised its negotiations. The service in New South Wales was overseen by two architects: Frank William Turner and Stanley Albert Morris. Eric (Erik) Sodersten was appointed Director in November 1953 and plans began to be regularly published in the Sun Herald. A Small Homes Service was also opened in South Australia in 1953.

The aim was, as it had been in the 1920s, to raise the standard of home design. A series of talks given by architects including Robin Boyd, Walter Bunning, Peter Muller and Harry Seidler helped to introduce the scheme. Topics included choosing a site, choosing a plan, suitable building materials, and planning for outdoor living. Seidler designed four different small homes and he kept the published designs in his scrapbook. Michael Dysart recalls receiving royalties for his Small Homes Service designs prepared in 1956. The New South Wales series of plans was differentiated from the Melbourne series by their code, having an ‘S’ at the start. Designs were in brick (S/B), brick veneer (S/BV) and timber (S/T). A conventional three-bedroom (S/BV501) home was one of the initial designs, published 29 November 1953. One of the first timber houses published, S/T403, was much more modern in plan and appearance.

Those living in country New South Wales could write in with their requirements and a selection of suitable plans would be sent out by the service. In 1954‒1955, the NSW Chapter published a series of plan booklets produced by Small Homes Service (NSW) entitled Homes for Every Taste, which included a number of designs that had already been published. The number of designs submitted by members was not as many as had been anticipated when the scheme had been proposed. The total number of designs, including designs by fourth-year students, in September 1956 was about 40. No detailed records that match the published designs with architects have yet been located. Douglas England, Arthur Griffiths and Russell Jack of the NSW Chapter’s Younger Members Committee had all submitted designs. By 1957 individual designs had stopped being published.

It was among the timber house series that the more modern designs could be found. Despite considerable effort by Bunning to promote modern architecture the public seemed to prefer the more conservative designs. In 1958 Australian Home Beautiful announced that after “a two year analysis of home plan sales, somewhere between conservative and slightly modern lies Australia’s most popular home” 1.  The NSW Chapter continued to promote the well-designed modern home, and encouraged the Sydney County Council to update their Design for Comfortable Living pamphlet. The Chapter recommended that the Sydney County Council include the House of Ideas designed by Hely and Whitelock for Taubmans at Woolooware. This house survives today.

The Australian Women’s Weekly proposed a scheme of their own in each state; however their houses were more expensive, costing up to 7,000 pounds. The NSW Chapter commented that this amount exceeded considerably the generally recognised amount for a ‘small home’. The Australian Women’s Weekly home planning centre opened in Anthony Hordern’s department store on Brickfield Hill (south of Liverpool Street, Sydney), and there were centres in Melbourne and Adelaide. The Australian Women’s Weekly published plans on a regular basis, some of which actually featured the architect’s name. Not to be outdone, Grace Brothers in Parramatta opened a service during the same month, September 1957. Their home planning advisory service had been operating in their Broadway store since 1954. By the late 1950s many designs were being promoted as holiday homes rather than as main residences.

A similar scheme was planned for Canberra in 1954 and it was intended to obtain plans from both the New South Wales and Victorian small home services. The idea was shelved for a time, as most of the leaseholders in Canberra were employing an architect. In 1958, the National Capital Development Commission (NCDC) decided that it would open a small homes service after all. Victorian designs were used initially, however, the following year, Sydney designs were also available to home seekers, in all a total of 100 plans. The New South Wales and Victorian numbering system was retained. Monaro T355 was a Victorian design, whereas Tallara (S/B301), Goodradgibee (S/T622) and the split-level Booroomba (S/T643) were all from New South Wales.

Small Homes Service (NSW) operated out of the fifth floor of David Jones, and in 1960 a full-sized example was erected within the store as an example. The annual reports of Chapter Council continued to paint a positive picture:

“The Small Homes Service (NSW), conducted by the Chapter in conjunction with Home Beautiful, continues to operate satisfactorily, giving a useful public service which aims at contributing to the improvement of design standards in small low-cost houses.”

By 1964 the mood had changed, the Chapter was concerned at what they considered to be the poor standard of design of Small Homes Service (NSW) plans. The Victorian service was cited as an example of the comparatively high standard that could be achieved. The decline in the popularity of the plan service seems to correspond with increased interest in project homes. A subcommittee was set up that recommended the service be disbanded and an alternative developed, however, they noted that the staff “accomplished a minor miracle by keeping the service functioning for nearly 12 years with very little support from the profession”.

In 1967‒1968, pressure from members saw the service continue despite the reservations of the Chapter Council. In 1970, the service was to be wound up as no agreement could be reached regarding an alternative. Ownership of Small Homes Service (NSW) was transferred to the Building Information Centre and the name changed to the SYBIC Homes Service. To supplement their design range, SYBIC held competitions, such as the 1970 Houses for the Seventies.

While the New South Wales service overall may not have been viewed as a success by the Chapter Council, the regular publishing of designs had an impact. The combined living-dining area ‒ initially the result of the need, in the late forties and early fifties, to plan houses in a compact manner to meet official size restrictions ‒ became widely accepted. Living areas opened onto paved terraces. Designs with names like Bringing the Outdoors Indoors, published by the Small Homes Service (NSW), contributed to the widespread adoption of the idea of informal living for which Australia is now known internationally. 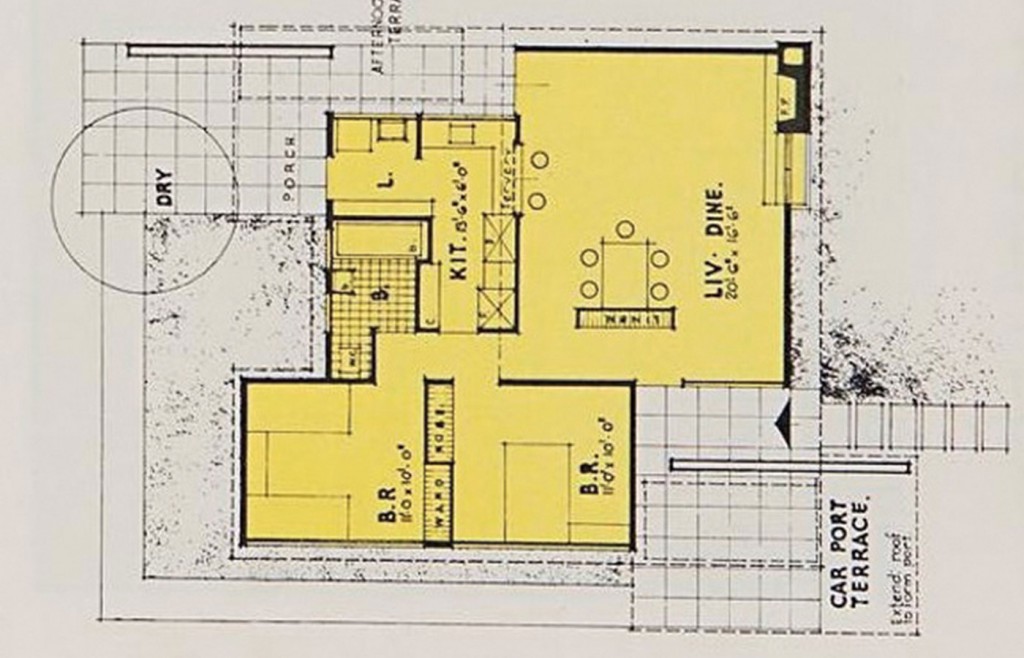 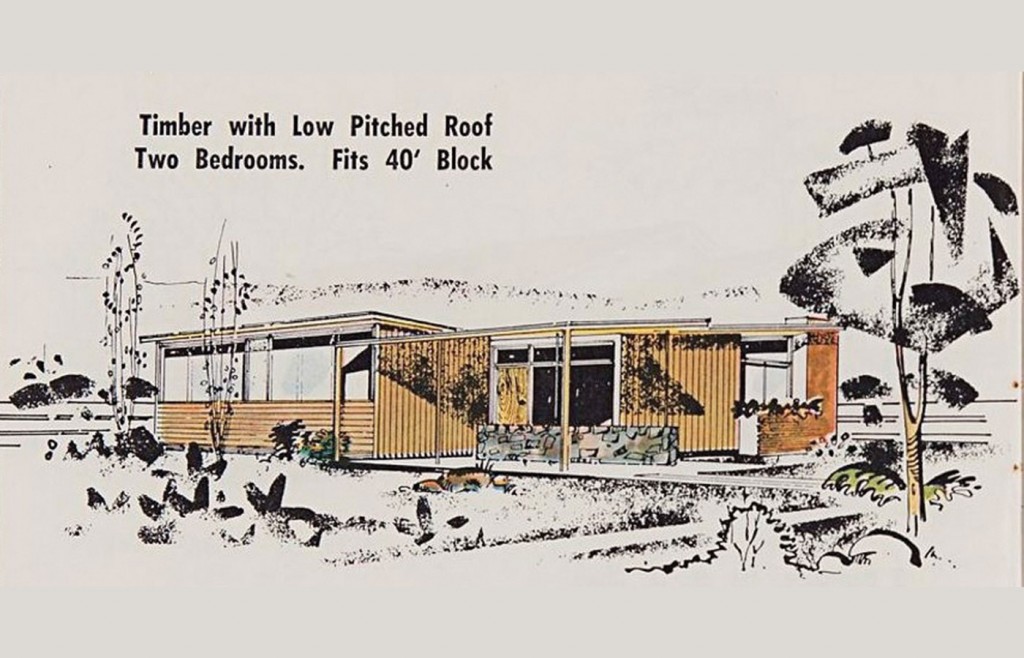 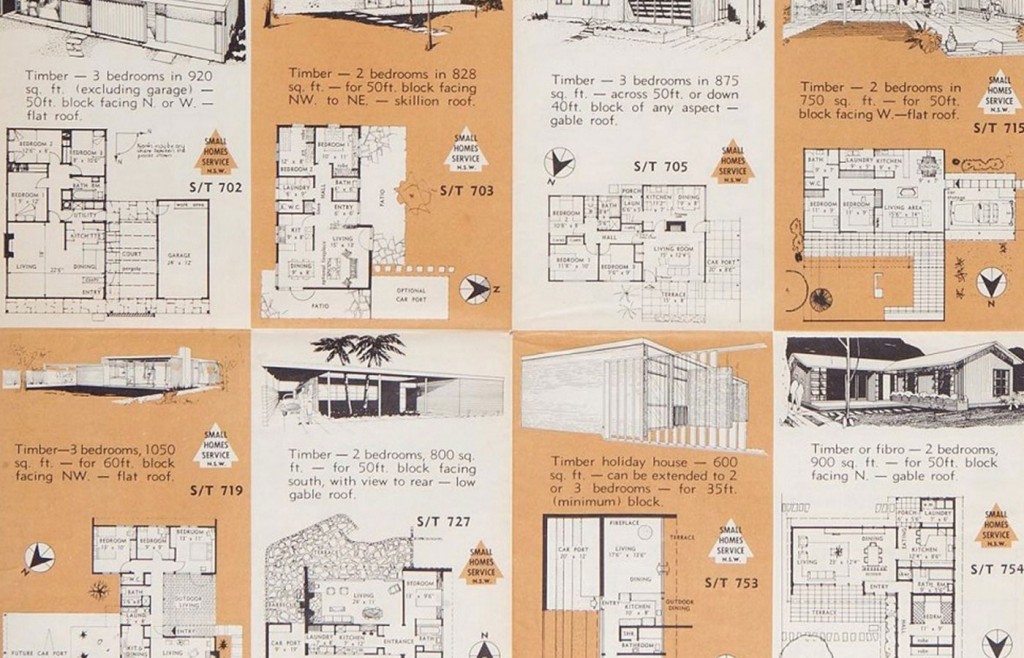 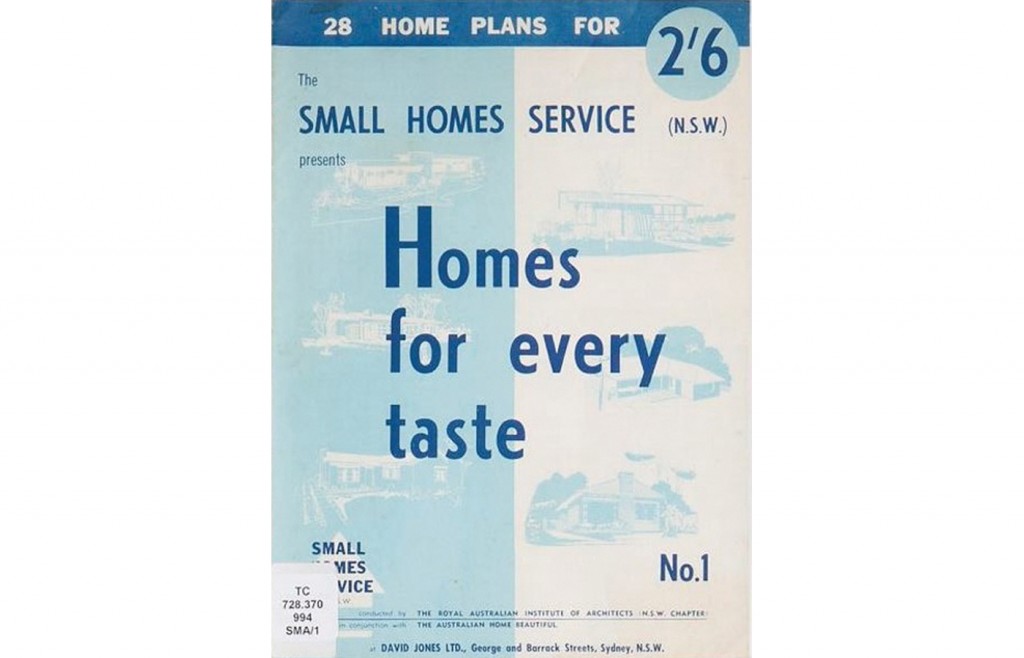 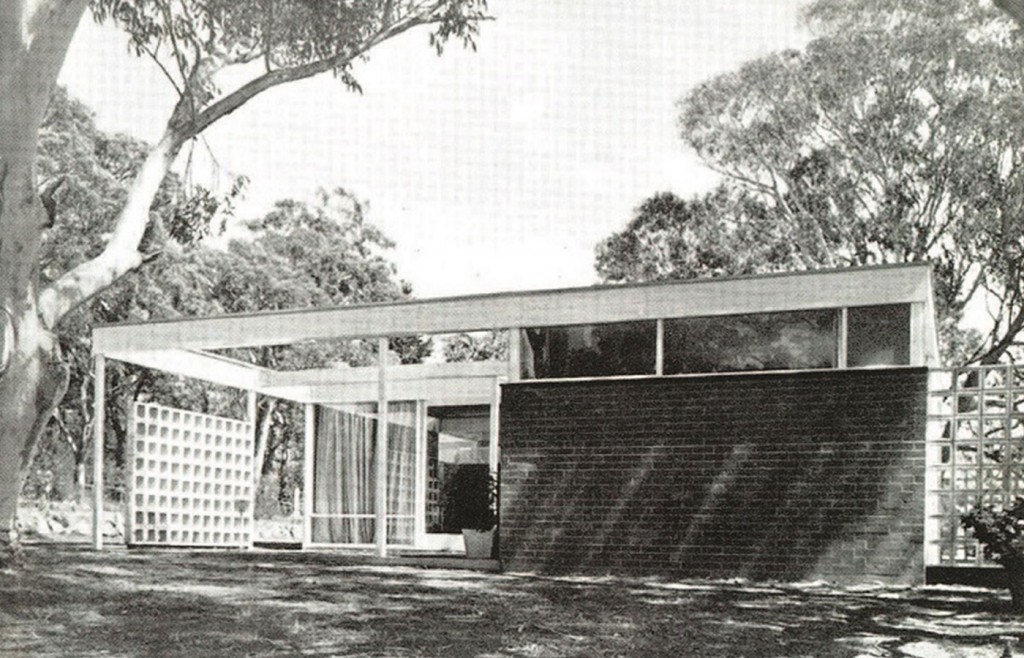 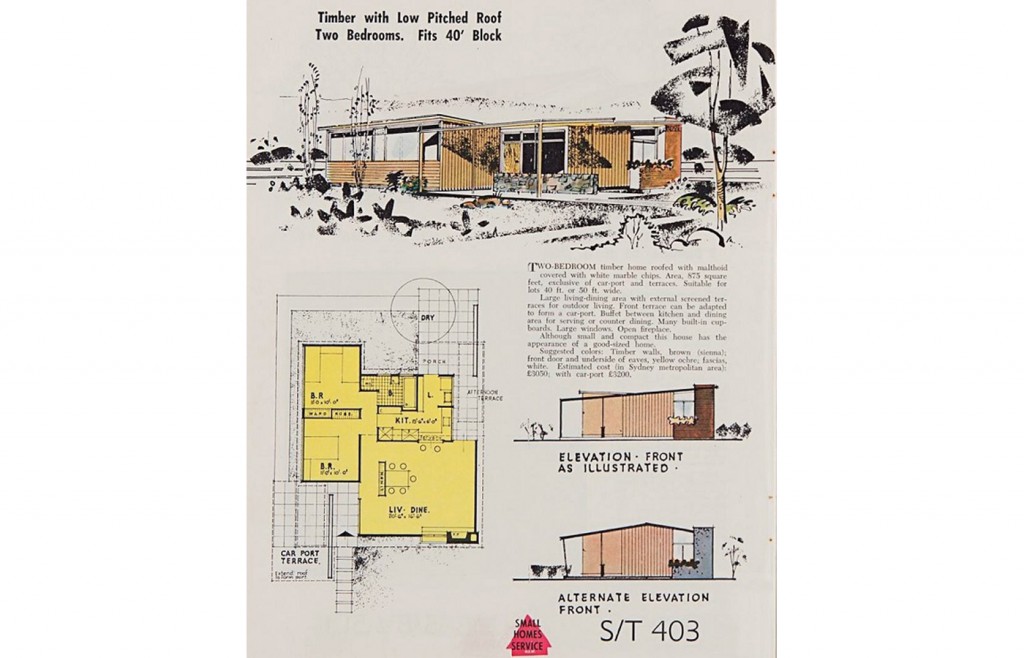